Why a Baobab tree?

The baobab tree (also known as monkey bread tree) is one of the best-known trees in Africa. In the hot and dry regions, it is a true survival artist and thus a symbol for all those who make the best of the situation even under adverse conditions. Just like the Baobab Children Foundation, a non-profit organisation that has been running an education centre for children and young people in Ghana, West Africa, for more than 15 years.

In a rural area where there is hardly any chance of education, the Baobab Children Foundation opens up a perspective for children and young people. Often, the available financial means of the families are not sufficient to enable their children to attend school. This is where the organisation comes in and offers the opportunity to gain theoretical and practical experience in its own training centre. Koenig & Bauer supports the Baobab Children Foundation in achieving this goal.

So that many people can move big things through small steps.

Education creates the future. Giving young people opportunities and perspective is part of our philosophy. That is why Koenig & Bauer supports the Baobab Children Foundation and sponsors 15 children and young people. Get to know them.

The 19-year-old has been with the foundation for a long time. He came to the Baobab Children Foundation at the age of 12 and has already been able to learn many new things here despite his learning disability. His speciality is building bamboo beds. By wrapping reeds around the ends of bamboo canes, they can be joined together at right angles to form a very stable construction. His absolute favourite sport is football, where he prefers to play in the position of striker and is a real goal scorer. 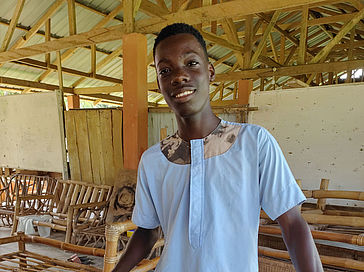 17-year-old Diana is in the fourth year of her apprenticeship. In the workshop, she makes coffee and coffee tables, among other things. What she enjoys most is the final assembly of the furniture pieces, when the bamboo tubes are connected with hammer and nail. Diana was able to prove how quickly, precisely and carefully she goes about this in a quiz, a kind of examination event at the school. She had to make a bedside table in a short time, which was assessed by her training teacher. In her free time, Diana likes to play volleyball or go jogging. 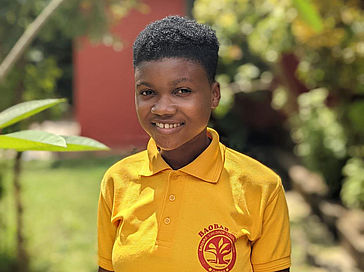 Emmanuel is 13 years old and in his first year of education. He attends the school's lowest academic class – the Special Class – and is part of the Carpentry Department. “We learn a lot about different tools, like hammers, planes and saws,” Emmanuel says about the work in the workshop, although he personally prefers to handle the saw. As a defender, he gives his all at his favourite sport, football, and goes jogging very often to train his fitness. 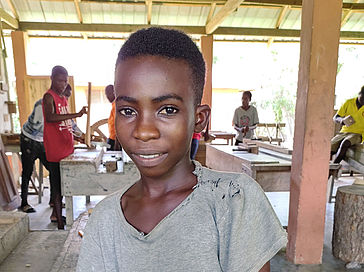 At 17, Emanuel is already in his fourth year of training. He has great fun learning new things and expanding his skills. One thing he remembers very strongly is weaving baskets out of palm branches. Emmanuel can really let off steam when playing volleyball and jogging. 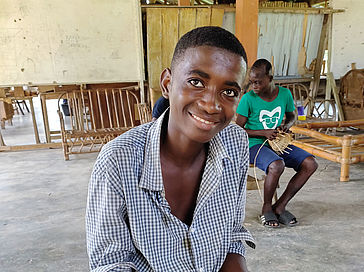 12-year-old Isaac is in the first year of his apprenticeship. “Most recently, we built a small side table,” he explains. And that's not so easy: first the long willow sticks have to be fetched and measured. For a side table, for example, you need 12 pieces, each one foot long. Isaac also finds basket weaving very interesting. When he plays football in his free time, he likes to stand in the goal. 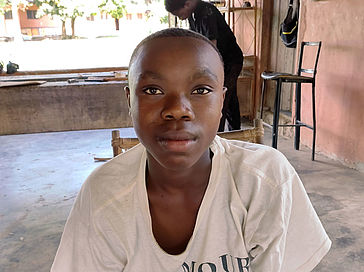 Thomas is 14 years old and in his second year of education. Before a social worker brought him to the Baobab Children Foundation, Thomas lived as a street boy in Cape Coast. When asked what he does in the workshop, he immediately lists a whole range of furniture: Coffee tables, beds, chairs, baskets and even TV tables. He enjoys making coffee tables the most, because you can bend the small sticks in a very artistic way. In his free time, he likes to play cards or dance to current music. Thomas also enjoys climbing and performing acrobatic tricks. 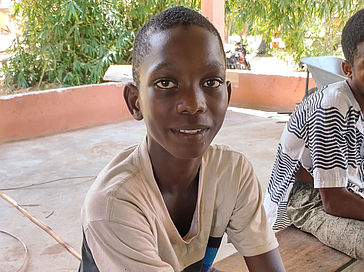 17-year-old Thomas is in the second year of his apprenticeship. In the Carpentry Workshop he learns how to build a wide variety of furniture – tables, chairs, coffee tables, serving trays and wooden spoons. Each time there is something different to discover. He likes that his teacher shows him a lot of different things. For example, how to use all the tools, what safety rules to follow and how to measure correctly. He especially remembers that you should not use nails, but dowels, for chairs that are used on the seashore because nails would rust. He is particularly proud of the kitchen chair he built during the practical quiz, for which he got full marks. In his free time, he likes to play football and volleyball. 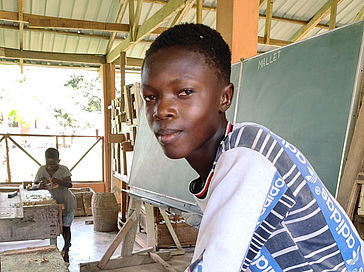 Seybowie is 16 years old and already in his fifth year. Due to a genetic disease, he and his two brothers were abandoned by their family and the village community. When he came to the Baobab Children Foundation, he was covered in wounds and severely malnourished. What he likes about working in the workshop is always learning something new, like weaving baskets. Seybowie enjoys playing football, but even prefers playing memory and has a big appetite as well as many favourite dishes. 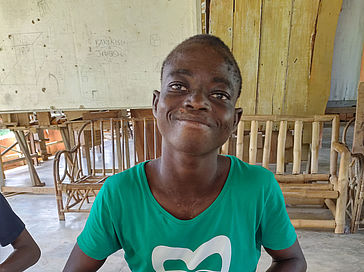 14-year-old Etuaful is also in his fifth year with the organisation and attends the primary class at Baobab School. Like his brother Seybowie, Etuaful suffers from a genetic disease and was cast out. He has no fixed job in the workshop, but shines with his helpful nature and is considered an attentive listener. He is mainly learning basket weaving, as this is what he wants to do professionally in his village later on. He also enjoys the art workshop, where he paints very elaborate pictures. Like his brother, Etuaful enjoys memory games and good food. 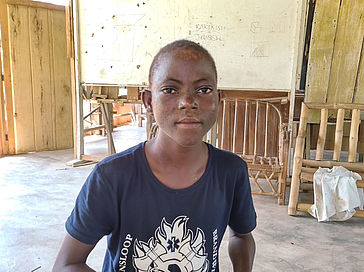 Zacharia is 17 years old and in the first year of his apprenticeship. “We learn a lot about different types of wood joints and also work with them,” he says about everyday life in the workshop. By this he means, for example, halved joints or lengthening joints. He enjoys his work so much that he also spends his free time working with wood joints. Of course, he also enjoys playing football with the other boys. His goal is to move to Cape Coast one day to find a job in a woodworking shop there. 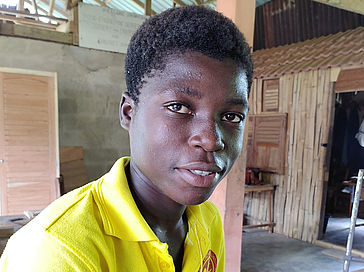 15-year-old Richard is in his first year of training at the Baobab Children Foundation. So far, he has been most impressed by the production of a folding table, because there are many different production steps to go through. From planning the two halves of the table to making the sketch of the parts to measuring, cutting and joining, Richard has followed the whole process with a lot of interest and skill. He is already a real pro at building kitchen stools and shows great skill. In his free time, Richard enjoys playing football in the defensive position and table tennis. 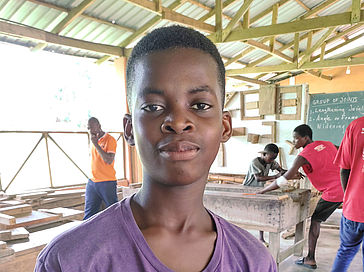 Emmanuel is 17 years old and in his first year of training. Although he hasn't been with the company long, he already knows that it takes some time to turn an idea into a finished piece of furniture. “First we plan a certain type of chair or table on paper. Then we transfer this plan to the material and measure it. Then the wood is levelled and cut on all sides, and finally the individual parts are assembled into the finished piece with the help of nails or wood glue.” The sight of the result of his work always makes Emmanuel particularly proud. He is strong at levelling on the machine and measuring. In his free time, he likes to read and listen to music or even play it. 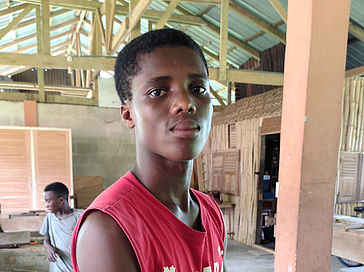 16-year-old John is in his first year of training. Lately, he and his group have been building chairs for the staff and teachers at Baobab School. “Some of the chairs even came with armrests, which made everything a bit more complicated,” John says. Some of the furniture he made has already gone to the Baobab shop in Cape Coast. His favourite thing is to build large tables that can be used, for example, as sales tables for fruit at the roadside or in the school's food hall. Although John also enjoys playing football with the other students, he often spends his free time learning even more about his work in the wood workshop. 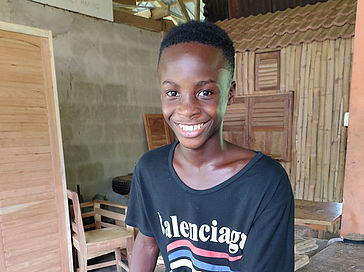 17-year-old Maxwell is also in his first year. What he remembers most from his work so far is the construction of a beach lounger: “First we cut the curved side parts to size. Since there were to be two, of course, the thicker beam had to be cut in half. Then all the planks were cut to lie on top and there were a lot of them.” In his spare time, he also enjoys playing football at the outside forward position and spends a lot of time in the library reading whatever comes into his hands. 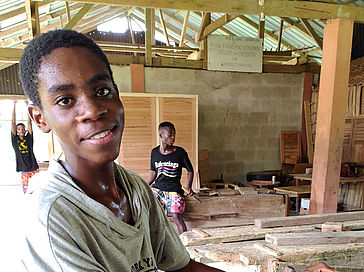 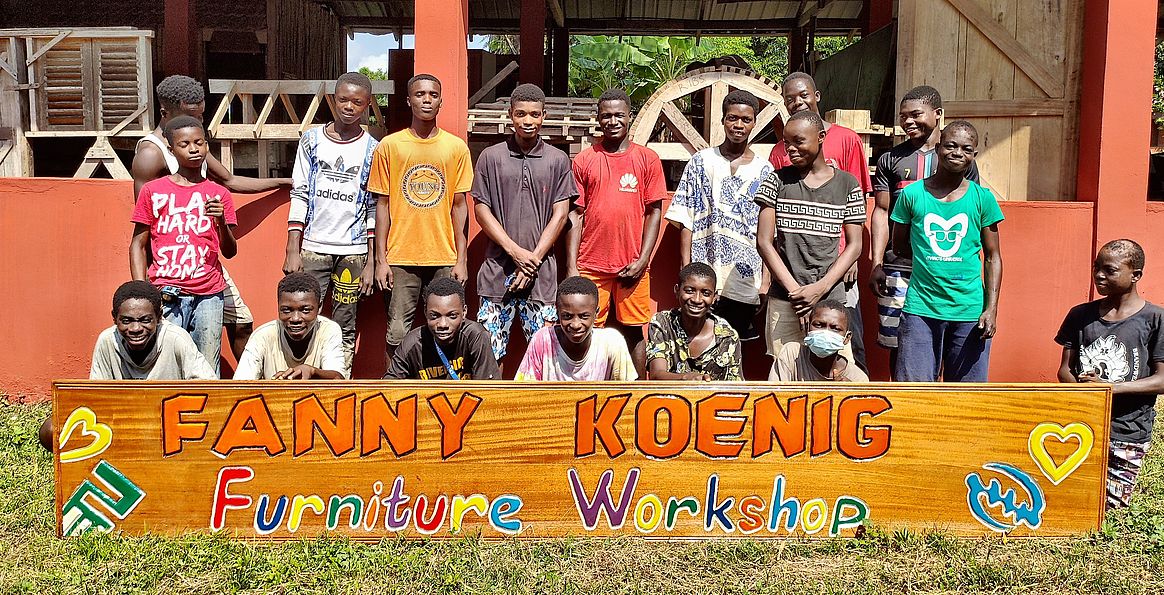 In the workshop of the Baobab Children Foundation, the children and young people receive training in crafts. The curriculum covers many different areas – from furniture planning and production to basket weaving and traditional handicrafts. The training opens up the possibility of a state examination, so that some of the graduates can fulfil their dream of owning their own workshop. In addition to the acquisition of basic knowledge and craft skills, the Baobab Children Foundation offers the children and young people above all a perspective for an independent future. Moreover, living and learning in the community is a central aspect of personality development. People with disabilities are often marginalised in Ghana. With the conscious orientation of the Baobab Children Foundation as an inclusive organisation, they are actively trying to promote a change in thinking and acting. Educating children together is a great enrichment for all.

Social commitment has been one of Koenig & Bauer's core values from the very beginning. Fanny Koenig, the wife of company founder Friedrich Koenig, was actively committed to the welfare of employees and introduced social security systems as early as the mid-19th century, such as a company health insurance fund and the factory training school, which still exists today. Fanny Koenig is considered Germany's first female company manager – not least because of her social initiatives. Giving people hope and perspective, especially in difficult times and adverse circumstances, is a virtue that Koenig & Bauer has always upheld in its long tradition. By supporting the Baobab Children Foundation the company demonstrates that these core values know no boundaries – neither operational nor geographical. In honour of Germany's first female company manager, the Baobab Children Foundation workshop bears the name “Fanny Koenig Furniture Workshop”.

Would you also like to donate to the Baobab Children Foundation or are you interested in becoming a sponsor? You can find all the information here.